The Ballad of Barolo

As I mentioned, more on the birthday celebration...

Just after New Year's 2008, I decided to put the wheels in motion for the Sweet Partner in Crime's 40th birthday. I thought it might be an interesting idea to get a bottle of wine born two-score years ago and open it during our celebratory shindig.

Trouble is, options get pretty limited when you're trying to procure a wine that old. Ports, brandies, cognacs, and armagnacs are regularly that old -- but none of those are faves of the SPinC, especially not while enjoying dinner on the patio in summertime. There are some French wines that can hold up that long, but they're prohibitively expensive. See what the going rate on a 1968 first-growth Chateau Latour is these days, for instance.

That brought me to , where several types of wine are built for the long haul. The one I really wanted to see what I could do with was Barolo. As I'd mentioned before, I'd tried the Italian "Wine of Kings" before and wasn't all that impressed -- largely because Barolo takes 10-15 years to get into its wheelhouse. Also, since the Sweet Partner's favorite kitchen creation of mine is my somewhat nontraditional eggplant parmesan, it seemed a natural match.

Any wine aged that long is going to be a crapshoot. A buyer is gambling that the bottle has been stored in good, stable conditions and that the cork has managed to hold together in a reasonable fashion. You're also hoping that the natural fermentation hasn't already turned the wine into an expensive bottle of vinegar. Unless a wine's been cared for properly, maybe 1 in 100 bottles will be drinkable.

There are companies out there who specialize in selling "collectable wines." A little research led me to one whose name I won't publicize here (for reasons that will become apparent). In mid-January, I called them to inquire about some of their selections. They had five Barolos from 1968. They put me through to "," their Italian wine specialist. I asked him which one he would get if he wanted one that would drink well. He made a recommendation and I placed my order. He said it would be to me in a couple of weeks.

Three weeks passed. I called again. He said there "had been a dock strike" and the wine shipment was held up in port. He said to call back in a couple of weeks. Three weeks passed again. I called again. told me that the "strike was over," but that my wine wasn't on the shipment, he'd be checking on it, and he'd get it to me for sure. Then came the height of basketball season, and I got distracted for awhile. The beginning of April rolled around, and I called yet again. I was informed that " was no longer with the company" but my order was still pending. I started to get a bit nervous.

Finally, the beginning of May rolled around, and I still hadn't received the wine.I called back one more time and spoke to their new Italian wine guy. He told me that the original Barolo was unavailable, but there were a couple of other potentials he could check on. He said to give him a week. I finally heard from him after ten days, and he gave me the news that there were no Italian 1968's to be found anywhere. He offered me a refund. I took it, swore loudly after hanging up, and then started madly Googling.

Call it fate, divine intervention, or just dumb luck, but I stumbled across WineCommune.com, a sort of eBay for wine -- and discovered a seller with excellent reports and several Barolos from that vintage. After a couple of emails, I placed another order. Four days later, I had a bottle of 1968 Renato Ratti Barolo in my greedy little hands. I smuggled it into the house, put it in the wine fridge, and set the wheels in motion.

After a birthday dinner and wonderful brunch from Julie Francis at Nectar, picking yet more cherries, some absolutely top-notch massages, and some relaxing at home, I was ready for the main event. I put together my parmesan (I grill the eggplant instead of deep frying it. The smoky flavor is perfect, in my opinion.) got it to baking, and relaxed for awhile on the patio with some Pinot Grigio.

ust after taking it out of the oven (it needs to sit for a few minutes before digging in), I made the presentation. At first, I think she thought it was just another bottle of Italian wine -- until she saw the date. "Ecstatically Stunned" would be an apt description. We shared some happy tears, then went inside to open it. The wax seal on the bottle was intact, and the cork looked to be in good shape. However, after the first half inch or so, the rest started to crumble when I extracted it. With the help of a mesh screen and some slow decanting, I was able to salvage almost all of the wine. 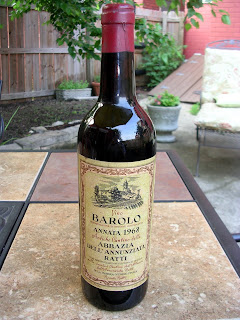 The first small pour was enough for us to know that what we had was an actual bottle of wine, not vinegar. The nose was fragrant and unique -- cherries, sort of, but other aromas I couldn't put my finger on. The flavor was actually somewhat thin, which surprised me, knowing how big this wine was supposed to be.

We served up the parmesan and poured a little more of the wine. Even after another 20 minutes, the wine started to change remarkably. The nose, tight at first, began to open up into a broad combination of cherries, spice, and smoke -- mirrored by the flavor continuing to deepen, becoming more tannic, but certainly not overwhelmingly so, and the fruit flavor deepened as well. The most interesting addition was the finish, which lasted for what seemed like ages. To me, it was a sensation of peeling back smoky layer after layer, balanced on top of the tannin. Needless to say, it echoed the flavors in the meal exceptionally well. We ended up eating and drinking much more slowly than we usually do, savoring the changes the wine continued to exhibit. 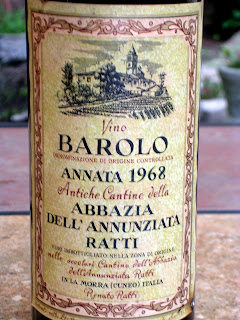 Finally, we settled into the lounge chairs to enjoy the rest of the wine. We tried it with some dark chocolate with mixed results, but we simply sipped the rest of it over the course of the next couple of hours, relishing the evolving and deepening flavors.

I'll draw the curtain at this point. While every day should be a celebration, I don't think there's anything wrong with going a little over the top. While the bottle certainly wasn't in the neighborhood of $15, I would recommend any wine lover trying something like this once, just for the experience. Just make sure you share it. You'll be glad you did.

Cool site. Thanks for the tip. I'm checking it out now.

Sounds like a pretty fantastic 40th birthday to me.