When the Sweet Partner in Crime and I consolidated households and moved northward, one of our favorite features of the house we ended up with was a couple of wonderful old cherry trees in our backyard. The blossoms welcome in spring in a beautiful way. We're also able to get some wonderful tart fruit from the trees.

These were some of the best "pie cherries" we've found, and I made a pretty tasty batch of cherry-flavored beer a couple of years ago with part of our pickings. Last year, unfortunately, a late frost followed by a drought killed our entire harvest. We didn't know what we'd see this year.

The trees bounced back in style. We had a bumper crop this year. Our neighbors, Jeff and Christine (from a few earlier episodes), came by for a partial harvest. We've still got more on the tree than we know what to do with. They're going to be out of town later this week, so they won't be here for the SPinC's monumental birthday celebration. 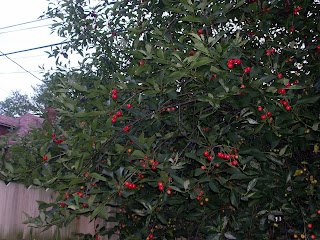 Christine, bless her soul, had the fabulous idea to take the cherries and put together a meal with that tasty fruit in each course. The results were wonderful and, since cherries are coming into season just about everywhere, I thought we might share some of these potential pairings for public consumption.

We started off with an appetizer of goat cheese topped with a "cherry-walnut-bourbon thing" -- which was close enough to chutney for government work. We initially had this with a cherry-vodka cocktail that Jeff whipped up, but if you wanted wine, I'd probably put this up against something relatively light, a little sweet, and bubbly. The Lazurro Moscato d'Asti ($8-9) would be a possibility. It's quite a sweet wine, reminding me actually a little bit of a sparkling grape juices, except not as carbonated and with a kick. The sweetness and a slight acidity would cut through both the cheese and the chutney nicely.

Our next course was a salad made from our neighbor's "yeah, you betcha" garden with tomatoes, cucumbers, and a cherry vinaigrette dressing. We had this with Lindeman's 2007 Bin 99 Pinot Noir. ($9-10) Ordinarily, I haven't been a big fan of Australian pinots. I think they tend to be a little bit heavy for this type of wine -- but this one worked pretty well. I think that we needed something relatively fruity and non-tannic without being overwhelming, and this worked. I think even inexpensive pinot will work if you need something relatively food friendly and flexible. Just don't expect the wine of a lifetime.

The main course was grilled pork tenderloin with a cherry sauce and asparagus. We had this with another pinot noir -- this time one that was safely out of -- Amphora 2006 Pinot Noir. Amphora is one of our favorite wineries from -- but they're known more for big cabernets and zinfandels than pinot. This one was more lush than many pinots, but had a delightful smokiness to it that worked well with the grilled flavors.

For dessert, of course, cherry pie. Pie-making is one of Christine's considerable talents and her cherry pies are unmatched. We had this with Oak Grove 2005 Reserve Zinfandel. ($7-8) You'd definitely want a relatively fruity wine to go with a pie like this. The Zinfandel worked reasonably well -- this wine is certainly that. By this point in the evening, it also held up as we continued to drink on it through the evening. If I'd had it to do over, I'd probably have gone with a dessert wine made from Zinfandel -- a late-harvest Zinfandel of some kind. Rosenblum Cellars does a late harvest called "Rosie Rabbitt" that you can often find for right around $15. The sweetness would have worked quite nicely with the pies.

All in all, a delightful evening in excellent company, and an exceedingly proper way to kick off the Sweet Partner's week of birthday celebration. More on that as it unfolds, of course...