At the turn of the century – the 20th century, that is – while futurism was giving birth to dreams of flying cars and regular trips to the moon, a highly modern dining option emerged: fast food. The first fast food restaurants were called automats.

Automats were a staple of big city life until the 1950s. A customer would walk into an automat and face a wall of vending machines. Instead of Dolly Madison snack cakes and Snickers, you could score yourself a hot, usually well-prepared meal and dessert for the change in your pocket. Find something you liked, drop in a few nickels, and snag a table. Dinner.

Automats largely died in the 1950s with the rise of the suburbs, superhighways, and a pair of golden arches. In North Dayton, however, the Cork & Vine Wine Market and Lounge is resurrecting the automat concept with a delicious twist – the Wine Station.

“Basically, the Wine Station is a self-serve wine sampling system,” explained Matt Thatcher, the Cork & Vine’s director of operations, “This allows us to open some finer wines and give people the chance to try some things we ordinarily wouldn’t be able to open and offer by the glass behind the bar.” 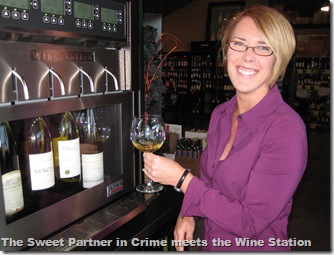 Visually, the Wine Station is the love child of a wine fridge and a cappuccino maker. Behind one of twelve windows are bottles of wine – six white, six red. Above each window is an LCD display, indicating the price of a sample.

The Wine Station, designed by Napa Technologies, preserves the wine and pressurizes the bottles with argon gas, creating a neutral atmosphere in which the wine won’t spoil. Hypothetically, the system can preserve a bottle of wine for 60 days after opening. To use the station, a customer would pre-load a Dave & Bustersesque “Smartcard” with an amount from $5-500. The screen displays the amount deducted for each choice.

I don’t sample $80 shiraz very often, so I inserted my card and went for a 1 oz. taste. I held my glass under the spout, pushed the button (the taste was $3.75), and with a whoosh and a gurgle, I had myself a nice little pour.

“We try to make sure things aren’t uptight here,” added Kara York, shifting her newborn in her arms as I swirled my wine. “With the area, a lot of people seem to be kind of intimidated by wine, so between the WineStation and the wine flights we offer, people really get a chance to try some new things.”

So I took a sip of this shiraz (Clarendon Hills 2004 Liandra Vineyards Shiraz if you’re curious). Seriously -- just this side of mindblowing. Imagine your palate resting on a dark chocolate Temper-pedic mattress. I’m personally glad that we didn’t know about the Wine Station during the recent wine cellar addition that the Sweet Partner in Crime and I did. The endeavor might have become a little more expensive.

From the outside, Cork and Vine is doing its best with its somewhat nondescript location, sharing a strip mall building in York Commons near the junction of I-70 & 75 with a Petland, a GameStop, and a Cincinnati Bell Store. They’ve put in an outside patio for folks to relax. Inside, however, they’ve successfully pulled off a “friendly industrial” look, with dark angular shelves, white leather couches, fireplaces, and a contemporary bar area.

In addition to the wine sampling, Cork and Vine also sells wine, as it’s linked with the Liquor and Wine Warehouse next door. “You can pull any bottle off the shelf and drink it right here with a corkage fee. [Currently $6]”

York explained that the owners saw North Dayton as fertile ground for a fine wine store. “There are a lot of people up here who want to get into wine. They’ve really discovered this place over the last year. We have a lot of local folks coming in, but we also have people that travel from a ways after they’ve heard of it. They want to learn more.”

In addition to the Wine Station, the Cork & Vine offers a full bar. While meatloaf and green beans aren’t on the menu as at the old automats, they have their own tapas-ish appetizer menu with antipasti, flatbread pizza, soup, salad, and dessert . As an additional sampling aid, they also offer a number of wine flights, also in one or three ounce pours. York said that they offer flights from big cabernets to sweet wines, “but we try to gently steer people away from white zin.We switch out the flights so that people will have something new to try every week or two.”

North Dayton’s home to any number of hotels and conference centers, so the Cork & Vine offers trolley service. Yes, an actual trolley. “It’s a pretty neat thing,” said Thatcher. “Basically, if you’ve got a group, call us up and make arrangements. If you’re within five miles of the place, we’ll pick you up, bring you here, and take you home when you’re done. A pretty convenient setup on any number of levels, you could say.”

I agreed. And went back for another whoosh and gurgle of Clarendon.