Close your eyes. Picture standing in the middle of a field of honeysuckle. Breathe in that scent. Now, imagine someone’s picked all of the flowers and drained the nectar into a glass, added a little apricot essence, and gave it to you to drink. Sip. Taste it. Let it sit on your tongue like a honey comforter. Swallow. Let the honey and fruit dissolve in your mouth for the next two or three minutes. Focus on the blissful. Then look at the bottle of Sauternes you’ve dropped some serious coin on and smile.
I really didn’t expect to spend $70 on a bottle of wine. Really.
I’m in the midst of putting together a three-part series of columns on wine and cheese, as you know. (If you’ve not read the entries on soft cheeses or hard cheeses yet, follow those links.) I was starting on the third – stinky cheeses. The Sweet Partner in Crime and I had the luxury of a rare free weekend during this crazy part of the year, so we had the opportunity to take an afternoon, relax, and gorge on wine and cheese. The cheeses we picked were Taleggio, Stilton, and Roquefort.
I have a great book, What to Drink with What You Eat, by Andrew Dornenburg and Karen Page. We call this our “Book of Armaments” for wine pairings. There have been a few times I’ve disagreed, but for“classic” pairings, they’re spot-on. They made some suggestions – the Taleggio called for an Italian red, which I didn’t want, so I went with Riesling; the Stilton’s classic was port; and the Roquefort – labeled in bold, all-caps, with an asterisk (translation – make sure to try before you die!) – was Sauternes. 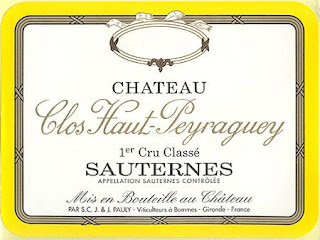 I gulped a bit. Sauternes is a sweet, white wine made in Bordeaux from Semillon, Sauvignon Blanc, and Muscadelle grapes. Because of the climate in this region of France, there’s a fungus called Botrytis cinerea (also known as “noble rot”) that attaches itself to the grapes, causing them to partially raisinate while still on the vines. There’s not nearly as much juice. An entire vine might yield enough juice for a single glass of wine. The wines taste sweet and have basic flavors of apricot, peaches, and honey.
Because the yields are so small from the concentrated juice, Sauternes and other “botrytized” wines are ridiculously expensive. A bottle of Château d'Yquem (the most famous Sauternes producer) will set you back $200+. More “pedestrian” versions can be had for around $70.
Considering the high costs, just realize this wine exists because some lazy winemaker with baskets full of moldy grapes said, “Screw it…let’s press these bad boys and see what we come up with!”
I had no intention of purchasing a Sauternes. I’d consider a bottle a ridiculous luxury, since I’m not a huge fan of dessert wine. I couldn’t imagine dropping that kind of coin on a bottle that I wouldn’t just drink. I went back to the Book of Armaments and found that Riesling & late harvest Zinfandel were acceptable with the Roquefort.
A’wine-shopping I went. Picked up Riesling and headed over to the dessert wine aisle to get a bottle of tawny port. I snagged it and happened to glance at the next rack of bottles. There they were, the Sauternes, beckoning. The lowest price was $50 for a half bottle. I must have stared at these bottles for ten minutes until the epiphany came:
“Go big or go home.”
I picked out a bottle in the middling price range. Chateau Clos Haut-Peyraguey 2001 1er Cru Classé Sauternes. 2001 was the year the Sweet Partner in Crime met yours truly, so I was hoping that would be good karma.
There are maybe a dozen bottles of wine that have left me utterly speechless. The SPinC called it an “Apricot-honey flambé.” I simply closed my eyes, slowly rolled my head side to side like Stevie Wonder, contemplating the fruity silk explosion rolling across my palate.
I expect sweet wines to be syrupy. The Sauternes was certainly thick, but because the viscosity is from glycerol (a product of the noble rot) rather than excess sugar, it’s the sheer power of the fruit flavors themselves that create the sweetness.
We were both stunned but said that we couldn’t imagine just drinking a bottle of this by itself. Along came the cheeses and assorted noshables that were to complement the cheeses & the wines. The Roquefort and the Sauternes were every bit as heavenly as I thought it would be. Roquefort is a powerful blue cheese, but the Sauternes was strong enough to hold up solidly, deepening and accentuating as the thick wine and the creamy cheese worked together as a delightfully melty experience. The port was listed a classic pairing with the Stilton, but something about the combination of the Stilton & pears with the honey of the Sauternes was one of the most unique, wonderful flavor combinations I’ve tried.
Then came the topper. The “perfect pairing” with Sauternes is foie gras, which is goose or duck liver paté. Not exactly something you can snag at Kroger, but I was able to find a substitute that was slightly less expensive and close enough. I first tried it spread on a cracker, but the flavor was cut too much – then I tried it again…just a big hunk of the paté, followed by the Sauternes. I almost fell over in delight.
The combination of those flavors – sweet, savory, salty, bitter, sour, fruit, meat, depth. Like perfectly cooked steak and cabernet, the sensation cements the fact that I can’t be a vegetarian. This pairing was nothing short of sexy, causing me to blurt out:
“Holy crap! That tastes like sex feels!”
This was a major moment of blissful exaggeration, and I’m lucky not to have received a well-placed backhand from the Sweet Partner in Crime. Seriously, it tasted naughty. Foodgasm.
Sauternes isn’t going to make my regular wine rotation anytime soon. We go through a lot of wine, and Sauternes is too delicious to be anything but savored. I also have no idea where this Sauternes ranks on the “absolute scale of Sauternes,” and I don’t care. We wrapped ourselves in unexpected decadence for a glorious evening.
More please.
Posted by The Naked Vine at Wednesday, November 10, 2010

About ten years ago, when I knew just enough about wine to be dangerous, I was browsing through a wine shop and found a half bottle of Sauternes for $10. It was Baron Philippe Rothschild, and it was obviously marked wrong. I picked up another random bottle of red and went over to the counter.

The owner was working that day, an older French-Lebanese guy I got to know better over the following years. He rang up the boring red, and then paused on the Sauternes. "This is the wrong price... Do you know what this is?" I spoke a bit about botrytis and monks and whatnot, and he laughed, and said, "OK, I will sell this to you for this price, even though I'm losing money. BUT--" he grasped my hands "--you have to open this up with a beautiful woman, and drink it with some fresh fruit and good cheese. Do this for me, and you'll honor the wine."

I followed his advice, and was very happy with the results. :)

I had Sauternes and foie gras for my birthday treat. It's a little slice of heaven.

Couple of comments. Wines like this are exceptionally hard to make. Extremely labor intensive and low yields. Nobody makes money selling Sauternes or Sauternes style wines. Yquem operates at a lost many years. Think of that when you're buying them. They're a labor of love and art since nobody gets rich making Sauternes.

Neat story, Benito -- I didn't even know that Rothschild made a Sauternes. I'd certainly echo that advice.

James, if they're running at a loss for all these years -- how do they stay afloat? Is it just the name and the tourism?

Mike: Yquem is owned by LVMH, a French holding company that owns ~60 of the most luxurious brands in the world. Moet & Chandon, Dom Perignon, Veuve Clicquot, Yquem, Hennessy, Glenmorangie, Fendi, Donna Karan, Louis Vuitton, Marc Jacobs, Sephora....all LVMH subsidiaries. Yquem is such a tiny, tiny fraction of that business that they operate at a loss most years to offset profits in other divisions. In the years they do turn a profit, it's barely a drop in the barrel.

5, 6, 7 tries through the vineyard, picking bunch by bunch over the course of a week or two. The more botrytis sets in, the lower the yield and the more concentrated the wine. Pick too soon, and you've average wine. Pick too late and you risk losing your entire year's production. A couple of humid weeks in October causes grey rot instead of noble rot, and you lose the entire yield. That's why Yquem is routinely the finest - they can afford to wait until the very last second to pick, and if they wait too long and the harvest is ruined, they simply don't make wine that year. No big deal, they just write off the year's worth of losses and start over next spring. That happened 10 times last century, so about once every 10 years or so, they make no wine at all.

Making good Sauternes and good Sauternes style wine is for the masochists. It's extremely difficult, risky, and labor intensive and you produce tiny amounts of wine/hectare. As expensive as they are, they're dramatically undervalued given the quality, the risk associated with making them, and their ability to cellar for 100 years.

Clos Haut-Peyraguey is a little known but very good 1st Growth Sauternes just over the road from d'Yquem. 2001 is also a great vintage so you were prretty close to heaven at a fraction of the price! They now have a great young winemaker in Anthony Defives and are making very serious stuff. The 2007 and 2009 were very good and it is looking good for 2010 too.