Wine and Dinner of the Month Club – October 2010

Well, I’ve had a good run with the monthly dinners, but at some point good fortune runs out. That’s pretty much what happened with this month’s entrée. I would still recommend trying this dinner and the wine was excellent. Just give yourself plenty of time and don’t get frustrated, like I did.

First, a little context. Due to Christine’s travel and some of our other commitments the only night available to make the October meal was Sunday, October 31. This was Halloween, and in our neighborhood that means about 300 kids traipsing by our house between 6 and 8 pm. I didn’t want to wait until afterwards for dinner, so I decided to make it beforehand. This put me under a little time pressure. The shrimp cocktail was easy enough. I just boiled fresh, deveined shrimp for about three minutes and then removed the shells. I put some ice in Margarita glasses with cocktail sauce and arranged the shrimp on the rim of the glass for a nice presentation. 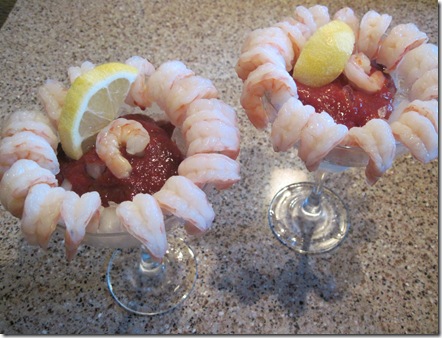 On to the crab cakes, where my troubles began. The recipe was easy enough to follow, but I did not do a good enough job emulsifying the oil in the mayonnaise to keep the crab meat together so when I drenched them in the bread crumbs, they just fell apart. I got a little (okay, a lot) frustrated and finally just mixed the crab meat and bread crumbs all together like a loaf. The result was that, instead of a nice bread coating on the outside of the cakes, there was about four times as much bread crumbs as necessary mixed all the way through the cakes. I also had to add another egg to keep the cakes “glued” together. The result of course was cakes that were dry and a little tasteless, though they did look okay. However, the smoked Gouda béchamel turned out well and was particularly good on the asparagus, which I steamed. The potatoes I boiled whole for about 10 minutes and then sliced and sautéed them in olive oil with dried rosemary. One other issue I encountered was timing everything to be ready at the same time, and I think I used every pot, dish and inch of counter space in our kitchen, as you can see from the picture. 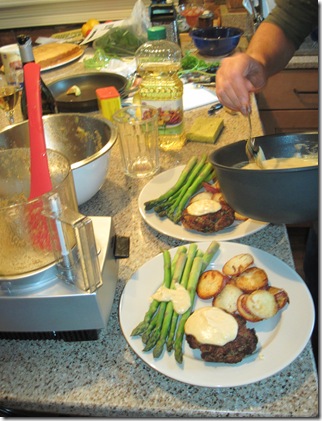 The dessert actually worked out well and was super easy. Just mix a can of pureed pumpkin with a box of yellow cake mix and bake. That’s right, just those two ingredients. No eggs, no milk, no water, nada. Once it is cool, mix up the glaze and drizzle over the cake. Both Christine and I were amazed how moist it was without any extra liquid or eggs. Enjoy, and we’ll see if things turn out better next month. 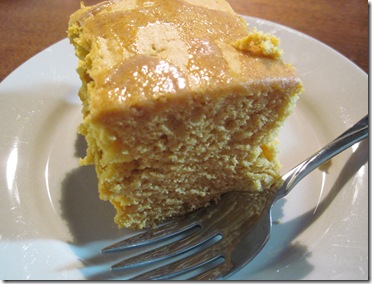