As I get started here, let me once again thank Jeff, the Naked Vine’s foreign correspondent, for his great work with his monthly dinner club writeups. I’m sure Christine the Pie Queen was pleased with her birthday present. If you enjoyed his writeups, please drop him a line in the comment section here.

This set of releases, sent for sampling by the California Table Wine folks, was scheduled to coincide with the king of the Hallmark Holidays. So, would you want to put these in a gift basket? I was sent three samples:

Before we get to the wines themselves, I realize I haven’t mentioned what “NV” means – it’s “non-vintage,” meaning the wine is made of a blend of wines not produced in the same year. For instance, when producing a blend, a winemaker might blend a barrel of 2008 Zinfandel with a half-barrel of 2010 pinot noir and a half-barrel of 2009 Tempranillo to get the flavor he or she was looking for.

You see non-vintage most often with sparkling wines, but more and more table wine blends are going to this model. In a relatively consistent climate like California, such a process is usually less expensive and gives a winemaker more flexibility in producing an “even” product from year to year.

As for this bunch of blends, we started by trying the wines individually.

The Bear Flag was our first sip. This wine had, by far, the most interesting label – a potentially chemically-fueled cacaphony of images by an artist named Benton Eduardo. A description won’t really do it justice, so see for yourself: 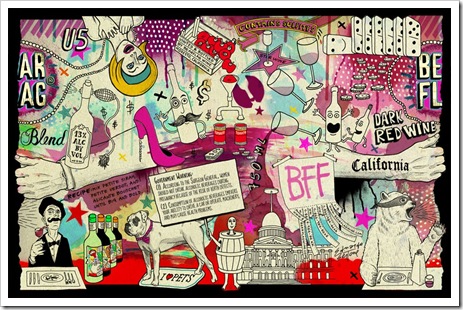 With a label that screams, “pick me and don’t worry about what’s inside,” I wondered if there would be due diligence done with the product itself – a Petit Sirah based blend with Alicante, Zinfandel, Petit Verdot, and Tempranillo. With that combination, I didn’t expect a blast of acidity, but that’s what I got on the first drink. However, the wine balanced with about half an hour of air. There’s a medium bodied blueberry flavor to it with some smoke on the end. Nothing complicated – a somewhat dry-and-fruity red wine with enough character to make it interesting. Not bad for $9.

Next, we moved over to the Apothic Red Blend. This is a Zinfandel based wine backed up with Merlot and Syrah. I’ve had any number of fruit bombs over the years, but this was, perhaps, the first vanilla bomb I’ve tasted. “It tastes like vanilla candy,” said the Sweet Partner in Crime. I concurred. It calmed down a bit after some air, but the vanilla dominated everything. The promised notes of “mocha, chocolate, and brown spice” from the description were swamped. We set it aside for later to see if it would be worth the $14 pricetag.

We cracked open the Barefoot Sweet Red with some trepidation. We’re clearly not the target audience for this blend of Zinfandel, Pinot Noir, Barbera, Grenache, and Petit Sirah. I was a little nervous when I saw that the alcohol content was only 10.5%. Zinfandels can get up to 14-15% alcohol without trying, so I wondered just how much residual sugar there must be in there. The answer? A bunch. This tasted very tart and rather sweet – like Sangria or a Seabreeze. Set me back a step. I’d imagine that this is built for drinkers of white zinfandel who don’t want to be seen drinking pink wine. The flavor profile is very similar. $6.

California red blends tend to be less tannic and more food friendly than the single varietal wines. With red wines, we thought we’d try a classic red table wine pairing. I picked up a couple of filets at the store, boiled some gold potatoes and topped them with butter and parsley, sautéed up some portabella mushrooms with some garlic and red wine. Even in in the middle of winter, I like finding a good excuse to grill, so I knocked the snow off the cover, fired that puppy up, and threw the filets on there for a good searing. (Rare. Yes, please.)

With the wines, the Bear Flag continued to be the top performer. Since it was a little more restrained to begin with, it evolved into a nice companion for the meal. It didn’t really stand out in any way, but it was a nice accompaniment.

The Apothic needed food. Even after a couple of hours of air, the vanilla was still overpowering. With a steak, however, those vanilla notes got blunted quite a bit, allowing some of the other flavors in the wine to come out. The potential was there for a very interesting wine, but it wasn’t evident by itself. It may benefit from a little more time in bottle.

As for the Barefoot? I ate a bit of the filet, had a sip of the wine, and declared, “That was the most unpleasant bite of steak I’ve ever had.” I can’t recommend it, unless you want to either make sangria or pour it over ice with a splash of club soda. As a spritzer, it’s quite decent. (Hey, it was for the sake of science…)

Finally, how about alongside that box of chocolates in your potential gift basket? We actually tried the wines with two-bite brownies. The Apothic was quite good, actually. The vanilla worked with the brownies nicely. The Bear Flag was decent. Nothing outstanding, but a solid choice. The Barefoot? No. Just no.

So, to sum up: I’m not the best judge of the Barefoot. It’s not a wine for me. The Bear Flag is a solid, value-minded choice for drinking or food. With chocolate, the Apothic is good now. It may evolve into a better food wine in a year or so.