[Some of you had been asking about Jeff’s last entry. Sorry to keep you waiting. Computer issues in the Plepysbury household put a momentary hold on the last installment. Enjoy!]

This month’s entry includes classic comfort food for the holidays and for the first time we had guests for the monthly wine dinner. We also got a chance to do a vertical tasting with the selected wine. Unfortunately I was not able to find links to all the recipes, but I have given the sources. Enjoy.

This wine dinner was extra special because it was on Christmas Eve and Christine’s parents were in town visiting, so they got to see the magic happen. Since we had extra guests I wanted to get another bottle of the selected wine for the meal. Of course, I bought these wines for Christine’s birthday last January, so there was no more of the 2005 vintage available. So instead I picked up a bottle of the 2006 vintage. I figured it would go well with the pot roast too and we would get a chance to compare the two vintages.

The pot roast actually takes about 3 hours in the oven so once I got that in I had plenty of time to prepare the red pepper spread and clean up the kitchen. I find it makes the dinner that much more relaxing when that little chore is already done. The red pepper spread was easy to make in the food processor and then served in a bowl with crackers for a tasty, and actually healthy, appetizer. The red peppers gave it a nice smoky flavor and the spices added a little heat without being over the top. 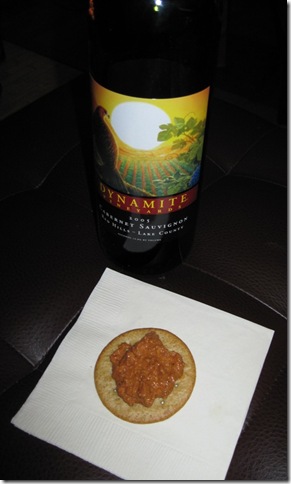 After the appetizers I plated up the pot roast and we sat down to dinner. The meat was tender with nice flavor from the caramelized onions and the vegetables. I did make one change in the recipe. One of the vegetables called for was a turnip. We couldn’t find turnips so I substituted a parsnip. For some reason the parsnip did not cook as thoroughly as the other vegetables and it was a little hard. I think turnips may be a softer root and would have cooked better with the roast. It was still tasty and I between the four of us, we cleaned up the platter. 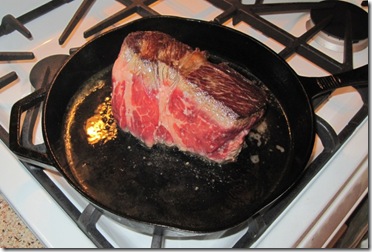 The wine had a deep ruby color and a nice flavor that paired well with the pot roast and roasted vegetables. 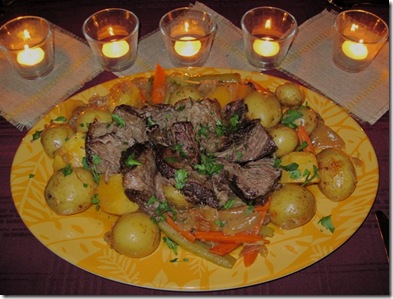 As you might expect, we couldn’t really tell that much of a difference between the two vintages of the same wine, but we thought the 2005 did have some more complexity in the flavors. This was probably because it had been sitting in our cellar for the last year maturing. If we kept a bottle of the 2006 for the same length of time, I’m sure we’d get the same result. 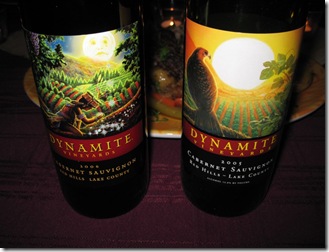 I had made the dessert earlier in the day because it was meant to be served at room temperature. We had finished off the two bottle of Dynamite Vineyards wine so we opened up a bottle of Beringer dessert wine which had been given to us by our friends and next door neighbors Marlane and Steve. Unfortunately, we recycled the bottle before I had a chance to write this post, and I don’t remember exactly what the wine was. I know it was a botrytis wine, which means the grapes had been infected with a mold spore that causes them to dehydrate and has the effect of concentrating the sugar in the juice. The resulting wine is sweet and we detected aromas and flavors of dried fruit and honey. It went great with the coconut custard pie. 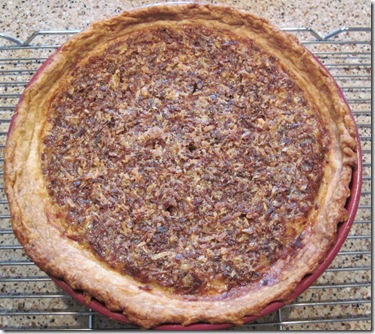 It was a great meal made even better by being able to share it with family. Make sure you check back next month for the last [ed.note – nooooo!!!!] of the Wine/Dinner of the Month Club entries.