I’ll be honest, I’d never given it a second thought. I knew that Port originally came from northern Portugal, and I’ve had my share of vinho verde, that summertime slightly sparkling slice of refreshment, but I’d never considered other wines from there, largely because I don’t remember seeing them in one of my regular wine store haunts.

Along came an opportunity to sample a few bottles of table wine from Portugal. As a public service, of course, I gave them a spin. We’ll get to them in a moment. A little background, first.

Portugal is actually fifth in the world in total wine export. The biggest importer of Portuguese wine is Angola with Brazil not far down the list (not surprisingly, since Portuguese is the national language in both places…) Much of that volume is comprised of Port, followed by headache-inducing pink wines like Lancers and Mateus. Vinho Verde is also gaining more of that market share. While Portugal grows some of the world’s more “common” grape varietals such as Syrah and Moscatel, most wines from Portugal are made from their abundant varieties of indigenous grapes – over 500 of them.

Like most European countries, Portuguese wine nomenclature generally follows the region of the country where the wine is produced.Vinho Verde, I learned, is not only the term for “green wine,” but is, in and of itself, a wine region. Other regions/wines include Douro (the most famous region – the birthplace of port), Dao, Bairrada, Colares, and Alentejo.

It’s the last region I mentioned, Alentejo, which produced the wines that I had the chance to try. Alentejo, as a region, covers a great portion of the southern third of Portugal. It’s not heavily populated and was best known around the world for the production of cork. However, it produces a great deal of the country’s red and white table wine, which was largely forgettable on the world stage. Over time, winemaking techniques improved along with the quality.

Since Portugal’s entry into the European Union in 1986, they adopted a similar quality classification system as several of the other countries. The “top” classifications are labeled DOC. The next step down is “Vinho Regional.” DOC is to Vinho Regional the same way you might consider Chablis to regular (white) Burgundy.

From the marketing materials I received with the samples, The broadening of the Portuguese wine market doesn’t seem to be focusing, at least initially, on “fine wine” – instead focusing on the “good table wine” range. [Note: many thanks to Jo Diaz from Diaz Communications for giving me the opportunity to try these wines.] So, how were they? I had the chance to sample a red and a white from two different producers: Finisterra and Alente. Finisterra sold around $7, Alente sold around $9. 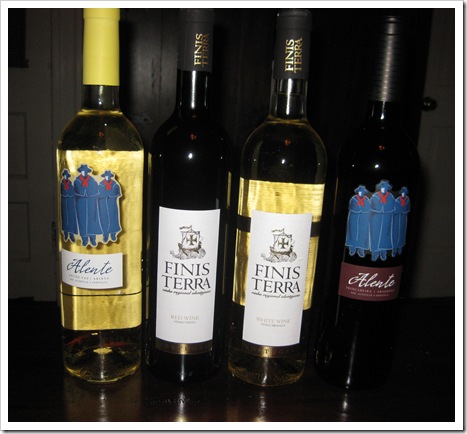 The first one opened was the Alente 2007 Alentejo Red Wine (or “Vinho Tinto” if you prefer). This is a DOC wine. This is a blend of Trincadeira and Aragonez grapes. It’s a fairly light red. There’s not much of a nose on this wine – faint raspberry scents. The flavor is somewhat acidic with some soft tannins at the end. On its own, it wasn’t great, but the pairing suggestion was for Spanish-spiced food. We tried it with some leftover (and damned good, I must say!) ropa vieja that we’d made for a party. The wine was an OK accompaniment, but it didn’t do anything to set itself apart. Not my favorite.

We moved on to the Alente 2009 Alentejo White Wine (or “Vinho Branco”), another DOC entry made from Antão Vaz and Arinto grapes. There wasn’t much of a nose on this wine at all: some apples and light wood with a slightly astringent smell like a bandaid in the background. Once past that, the body was pleasantly fruity. It’s moderately acidic with apple flavors and a little bit of mineral kicking around. The finish is fruity and soft with a little pepper that kicks in at the very end. I had high hopes with this with a paella that I’d cobbled together, since it was about as close to regional cuisine as I could manage. It turned out to be a very nice complement, but, like its red brother, it wasn’t memorable.

Then came the Finisterra 2009 Alentejo Red Wine – This is a “Vinho Regional” made from Aragonez, Castelão, and Tincadeira. The nose was quiet with faint raspberry and strawberry, but the body was a very different experience. The flavor isn’t especially fruity – some dark fruit there, but it’s generally lean and tannic. The palate isn’t complex, but it’s pleasant and there’s a solid finish of coffee and dark chocolate. The tannins are pronounced without being too strong, so it’s very easy to drink. We found it to be a really nice food wine. We had this with a winter vegetable soup – plenty of butternut squash and leek and other earthy flavors. It worked really well in a context where my first thought would have been something in the neighborhood of Cotes du Rhone. A Cotes du Rhone wouldn’t have been nearly as good with end-of-meal chocolate, either.

Finally, the Finisterra 2009 Alentejo White Wine was an interesting quaff. This Vinho Regional blend of Antão Vaz, Siria, Rabo de Ovelha, and Perrum gave me a snootful of apples and lemons with an odd little “cheese” undertone. The flavor is initially pretty tart, but it calms down pretty rapidly. Light body with fairly high acidity with some oak. The finish turns quite oaky at the end. An oaky pinot grigio, if you need to draw some kind of parallel. This one didn’t make it to food. We opened this one afternoon and it made a nice companion to conversation. A pretty decent value for a “drinking wine.”

All in all, the Finisterra wines earned higher marks from us. I thought they were very solid values for table wine. I’d recommend them for sure.

I’m certainly going to keep my eye on Portugal moving forward. If you like Spanish table wines, but you’re looking for a slightly lighter-styled wine, Portuguese wines could be your alternative.

Glad you enjoyed the experience, Mike. Being regional varieties from Portugal, they're a bit different that what we'd expect, because they're new flavors, as you've said... Our palates are pretty trained to our usual favorites.... I even found that with these wines. Like any new food, they're fun to explore. I'm not surprised about the Finisterra White becoming a social wine experience. Pretty fun!

Glad you gave them a try!

Thanks again for the opportunity, Jo. With the Alente wines, do you think that there are particular food pairings that work well -- or better than the ones I chose?