So here we are with the last of the Wine/Dinner of the Month Club entries (that is, unless Mike gives me a bump up in my royalties). This month, for only the second time, we go on the road. Christine and I headed out to West Virginia for some cross country skiing at White Grass Ski Touring Center. We try to get out there at least once a winter, hoping for good snow. This year there was plenty and the trails were as good as I have ever seen them. So good, in fact, that I hardly fell at all which is a pretty good measure of conditions. We were joined by our friend Patty in a cute little rental cottage with a hot tub. The kitchen conditions were a little less ideal than the skiing conditions, but we made the best of it and had a great meal. No recipe links this month, but the recipes should be easy enough to find from the sources below. One other note, the pictures are not their usual high quality. We forgot to bring our camera and wound up taking the pictures with Patty’s cell phone, but I think they give a good sense of how everything turned out. Bon appétit.

While Christine and Patty were taking a well deserved après ski soak in the hot tub--I had been in earlier and got out to start dinner--I worked on the stuffed mushrooms. These are super easy to make. You simply prepare the filling, stuff the mushroom caps with stems removed, and pop in the oven. The filling is mostly walnuts and spinach, with a little of two kinds of cheeses in the filling (gruyere and feta) to give great flavor and texture without being overly rich. Patty, who is not huge fan of mushrooms, said, “I could eat these every night for the rest of my life!” I’m not convinced that wasn’t the Maker’s Mark 46 talking that she and Christine were enjoying in the hot tub earlier, but the mushrooms were very good. 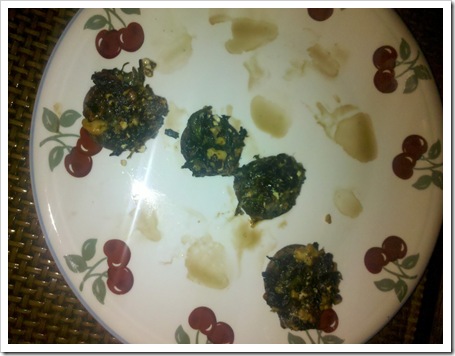 Christine and Patty both helped in making the main dish because there was quite a bit of chopping to do. It wouldn’t have been a problem at home, but with the limitations of the rental kitchen, it was nice to have some extra hands helping out. We substituted regular brown lentils for the lentils du Puy called for in the recipe. They worked fine and actually required a little less cooking time. We also used some chi-chi, non-antibiotic packaged andouille chicken sausages instead of the kielbasa called for in the recipe (Christine did the grocery shopping). This worked out as well, but after browning the sausage, there was very little fat in the pan, which is what you are supposed to use to cook the rest of the dish. I just added a little olive oil to the pan to make up the difference. One nice thing is that this is pretty much a one dish meal, which makes for easy clean up. I baked a quick loaf of crusty bread and plated up the meal. Both the mushrooms and the lentil dish had a lot of very earthy flavors. We all felt the wine did as well and so it was a great accompaniment to both dishes. 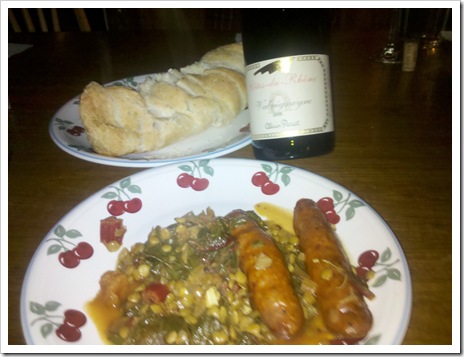 Patty had been kind enough to bring a cherry pie (my personal favorite) for dessert. Here the evening took a peculiar turn. We took the pie and a bottle of prosecco (and Christine in her pajamas) and drove into the little town of Davis to visit with a couple of Patty’s friends who were also out for a ski weekend. To protect the innocent, we’ll just call them The Russian and The Russian’s Boyfriend. Once there we all enjoyed some pie and prosecco. Some of us also had some of the Russian’s Russian vodka and a little more Maker’s Mark. I think the skiing the next morning was a little rough for at least one of us, but we all had a good time and I have to say it was probably one of the more eventful and entertaining of the past year’s wine dinners.

Love reading about your dinner for your wife. You are an inspiration!