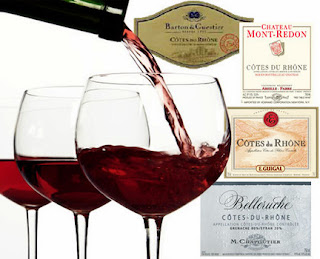 One of the interesting bits about building up an archive of columns is discovering my own little quirks --
whether it's reusing vocabulary, falling back on certain varieties of wine, or just the evolution in tone as I've written more and more entries.

For instance, I've likened all sorts of wines to Côtes-du-Rhone. It's one of my favorite French wines, so it's only natural that I'd use it as a baseline for any number of things, right? One problem, though...I'd never actually written much about what a Côtes-du-Rhone actually was, so I can imagine you saying, "Well, that's all fine and dandy, Mike -- but what in tarnation do you mean by that?" So, let's take care of that, shall we?

The Côtes-du-Rhone appellation is the viticultural area that surrounds the Rhone river in Southeastern France. It stretches from Lyon in the north to Avignon in the South and spreads east and west down the valleys of the various Rhone tributaries.

Côtes-du-Rhone (pronounced "Coat dew roan" if you have a stuffy nose), much like the Beaujolais region in Burgundy, divides its nomenclature by quality. Wines labeled "Côtes-du-Rhone" can be made from grapes grown anywhere within the region. About 95% of these wines will be reds. These reds must contain at least 40% Grenache. The remaining 60% will be largely a blend of Syrah, Mourvedre, Cinsault, and Carignan.

The Côtes-du-Rhone produces an impressively broad range of wines. The northern end of the Rhone valley is known for big, Syrah-based reds and delicate, impressive whites made largely from Viognier. The south of the region produces 80% of the wine -- most of the wines you see labeled "Côtes-du-Rhone" are going to be from the south and will be dominated by Grenache.

The next higher level of quality is "Côtes-du-Rhone Villages" -- these wines are made from grapes in a limited number of communes in the region. A few may even have the name of the town as part of the name. Beyond that are the "Cru" designations, wines from specific towns which stand among the world's best. You've likely heard of many of them -- Côte Rotie, Croze-Hermitage, Hermitage, and Condrieu in the northern part of the region and Chateauneuf-de-Pape, Gigondas and Vacqueryas in the south. There's also Tavel, the cru in the southern region just across the river from Chateauneuf-de-Pape that produces some of the best rosé in the world.

The wines we're looking at here, however, are the basic reds. Côtes-du-Rhone cranks out a lot of very good, very approachable red wine. These wines tend to be drunk young -- within five years of bottling. These reds tend to be medium bodied with lots of cherry and dark berry flavors. The "old world funk"/earthiness classic to many French reds is usually there to some extent -- but not as powerfully as in many Bordeaux. Even so, these are usually great wines to go with anything earthy or sausagey -- or even just to uncork and pass around.

So, if you'd like to see what I've been talking about all this time, here are a few for you to try:

Domaine la Montagnette 2007 Côtes-du-Rhone Villages: An excellent "gateway" Côtes-du-Rhone if you're looking for one to get yourself started, since there's not quite as powerful an earthy characteristic. It's there, sure -- but it's an undertone to the big black cherry flavors. There are also some herbal notes on the nose, and the finish is long and much fruitier than many Côtes-du-Rhone you'll find. A solid all-around wine and a good one for any kind of grilled food -- from chicken to steak. $11-14.

Verget du Sud 2005 Cotes du Luberon -- Cotes du Luberon is a region within Côtes-du-Rhone that nestles right up against the Provence region. I've tried any number of Verget's wines, and I've never been disappointed. The nose is a nice blend of cherries and earthy scents. This is an exceptionally well-balanced, medium bodied wine. There's a lot of complexity for an $8-10 bottle here. You'll get lots of dark fruit with a little edge of coffee. Finish is dry and lasting. We had this with some lamb sausages, grilled veggies, and couscous, and it was absolutely scrumptious. An absolute steal.

M. Chapoutier 2006 Côtes-du-Rhone Belleruche -- An interesting wine that also appeals to environmentalist sensibilities. Michael Chapoutier has long been a proponent of biodynamic and organic winemaking. This wine also has a lot going on. The nose is almost raisiny unless you let it breathe for a bit (say 45 minutes or so). At that point, you'll get an interesting nose of cherries, and cedar. There's a nice amount of fruit on the tongue coupled with some interesting peppery flavors and a strong shot of that French funkiness. The finish is long and somewhat tannic, making it a great match for stew, meatloaf, or something similarly hearty. $10-12.

Great Topic. I bookmarked it to my bookmark list and will back to you soon. Pls have a look at my site also and figure out how you feel. Regards,
sparkling wine bottle