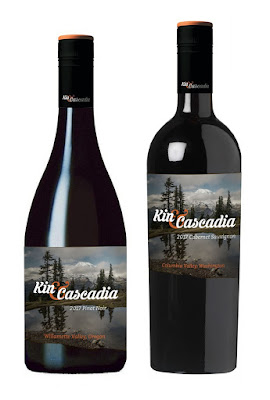 As I've gotten older and more full of years, my palate's changed a bit. Lighter-styled wines have been finding their way to our table more and more often. As a result, I've been grooving on Chianti -- that famously food-friendly red from Tuscany.

Now, if you're new here, remember that the naming conventions for Italian wines (as well as many European wines in general) are different from here. Many folks I know think that "Chianti" is a grape and "Chianti Classico" means a higher grade of Chianti. Release yourself from those assumptions. Chianti is the region within Tuscany from where the wine hails. (Chianti Classico is a subzone of the Chianti region.)

Chianti is made primarily from the Sangiovese grape -- at least 75% of the blend must be Sangiovese to be considered a Chianti. There are a number of other grapes, that can provide the other 25% of the blend, including red grapes Syrah and Merlot -- and whites like Malvasia and Trebbiano.

Because of this blending diversity, Chianti can be all over the map as far as flavor profile. Leaner, more acidic Chianti tend to have a higher percentage of white grapes blended in. The Chianti I had the chance to try recently -- Castiglioni 2016 Chianti -- was on the other end of the spectrum.

Castiglioni is the original estate of the Frescobaldi wine family. Wine has been produced from its vineyards since the 1300's. Their current version of Chianti is a straight blend of Sangiovese and Merlot. The result is an Italian wine that's a bit more approachable than many Chianti.

I find Chianti to have a bit of a "chalky" background flavor, which might not sound great to drink on its own -- but it actually allows it to mesh in a complementary fashion with just about any type of food. The Castiglioni has less of that chalk flavor because of the merlot in the blend, which masks it with a bigger dose of fruit. Cherry and blackberry are the dominant flavors here. This is a round, full, uncomplicated version of Chianti that can be sipped on its own.

With food, as with many Chianti, it's a much better choice in my estimation. We had this over the weekend alongside a savory lamb stew and it was a very nice accompaniment. It would also be a solid choice with roast chicken, red sauced pasta, or almost any kind of cheese, in my estimation.

Castiglioni Chianti retails for around $15. It's a very decent quaffer. Also, if you're new to Italian wines, this might be a good gateway bottle to start a vinous exploration of the region.

Longtime Vineheads know I've long been a champion of rosé. For over a decade, I've been chanting my "pink is not a flavor" mantra to winedrinkers worried someone might think they ordered a glass of white zin.

While I can't take credit for the now-social appropriateness of the pink stuff, I certainly appreciate that the upswing in the rosé market has driven a number of countries and regions to up their respective rosé games. One particular example of this -- Italy.

I've never been a huge fan of Italian rosé, in general. I've found their rosés, often marketed as "rosato," to be overly fruity, usually a little too sweet, and honestly inferior in quality to any French rosé. I'd prefer a very light Italian red, slightly chilled, to almost any rosato.

But this old dog can certainly learn a new trick -- because I had the chance to try this new offering from Frescobaldi in Tuscany -- Alìe 2007 Toscana Rosé.

Alìe draws its name from a legendary sea nymph. Like most ancient Roman myths -- the story of Alìe is derived from a similar Greek story -- her name was "Halia" in the Greek version. Thankfully, the story of this wine is much more pleasant than Halia's own legend -- google if you want, but fair warning: like most women in Greek myths, Halia/Alìe doesn't get a happy ending...

In any case, this particular wine, made largely from Syrah with a touch of Vermentino for crispness, is a uniquely bold rosé. Alìe boasts one of the more striking bouquets of any rosé I've tried in quite some time. Many of these wines have very light, delicate airs -- this one, not so much. I found a full nose of ripe melon, fresh blossoms, and tropical fruits. The tropical fruit flavors are certainly present on the palate, as well -- alternating mango, pineapple, and a little cherry flavor. I expected the finish to be a little flabby with this much fruit on the palate, but I was pleasantly surprised to get a crisp, clean wind-down, with those fruit flavors lingering on a rounded mouthfeel.

It's a pretty substantial rosé, so if you're looking for something super light and flinty to drink on a hot day, this probably isn't going to be your speed. As a food wine, though, it really excelled. We had this next to some chicken roasted with lemon, capers, basil and torn bread -- and the roundness of the palate made it an excellent complement.

If you're interested in breaking out of a rosé rut, this would be a nice change of pace. Alìe retails for $17-20.
Posted by The Naked Vine at Wednesday, April 17, 2019 No comments: