"I was lucky enough to be introduced to Barolo by Bartolo Mascarello -- a really well known producer who unfortunately isn't with us anymore. He poured a glass, I reached for it and he said, 'No, no...you need to wait.' We sat there for a long time, trying other wines, before he finally said that it was ready to drink. [pause, deep breath] He was right..."


I'm used to tones other than those of wistful remembrance coming from the mouth of an adult film actress.

A few months ago, a friend of mine sent me a link to a 2006 article in the New York Times entitled "Naked Came the Vintner." The article was about the winemaking venture undertaken by Savanna Samson, who saw winemaking as her "career parachute" for the day she decides to step away from Vivid Video and the rest of the adult film world. 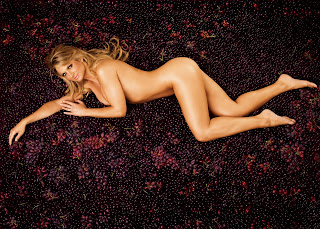 [However, she's still going strong on that front with several upcoming movies -- including two with Holly Sampson, one of Tiger Woods' alleged paramours. In case you're interested, her very NSFW home on the web is here.]

Celebrity winemaking is nothing new. Most of the time, it's a fundraising opportunity or a quick way to make a few bucks on the side. A few (Greg Norman, Francis Coppola, etc.) made a legitimate name for themselves and others (Maynard James Keenan) seem to be on that track. Savanna's self-described "porn wine" would likely have been shunted into the first category...that is, if Robert Parker hadn't given Savanna's first wine -- an Italian red blend called "Sogno Uno" (Dream One) -- 90 points in Wine Advocate. 90 points from Parker lent her instant street cred in the wine world, and a flurry of publicity followed.

I was intrigued. I sent a note to Savanna Wines, asking if I could review a couple of the wines for The Vine. Her business manager, Brian Corbin, sent me a couple of samples. Savanna was generous enough to spare a few minutes from the Pornutopia convention in Houston in December for a phone interview. 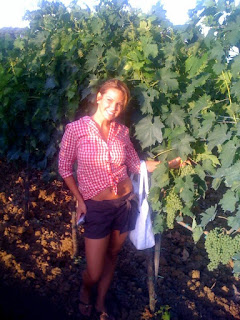 Savanna said she views the winemaking as "her own personal journey." She says that she has a vision of the flavors she wants to share and she "searches for that reflection." In searching for this vision, she enlisted the aid of an Italian vintner named Roberto Cipresso. Cipresso, who worked with the Vatican at one point, helped her put together the blend of Cesanese and Sangiovese that won her Parker's approval. Cipresso also helped her create her second and third wines, called "Sogno Due" and "Sogno Tre."

She says that she's focused, for now, on Italian varietals because she's "completely in love with Tuscany, and she can't get enough Sangiovese." However, she says that she's under at least some pressure to expand her portfolio -- pressure that she says she accepts readily:

"My distributor [Southern Wine & Spirits] would love for me to build a consistent portfolio of wines, but I would rather do it my way and keep experimenting for awhile to find things that I think are truly unique. I really enjoy using grapes like Falanghina [the primary grape in Sogno Due] that aren't as well known in the States. I've started up a relationship with Eos Estate Winery in Paso Robles and Roberto is going to come over from Italy to try working with American grapes, so we're really excited about that. I also plan to invade France. I'm going there in the end of February to work with Moutard, one of the Champagne houses, on a personal blend for a sparkling wine."

[The Vine attempted to contact both Moutard Pere et Fils and Eos Estate for comment. Moutard did not return the inquiry. Nathan Carlson, winemaker at Eos, has worked on celebrity wines with Vince Neil of Motley Crue and for the 100th anniversary of the Indianapolis 500. However, he said that he has not been approached by Samson.]

I asked her to compare the Parker rating with winning her first AVN award (the adult film Oscar, more or less, which she won for a film called "Looking In"): "I was honestly thrilled that he wanted to try it, since he was in the midst of tasting Chateauneuf-de-Pape at the time...When I saw that I'd gotten the 90, I was floored -- and it was really a similar feeling, because I really felt like I was appreciated for something I really put my heart into." Although, as she playfully told both the NYT reporter and myself, "He should have given it a 93."

She said that this experience really hasn't changed her palate -- rather, it's helped her understand it more fully: "I remember when I started drinking Bordeaux, and I just didn't know what to call some of those flavors -- ice cream cones? Manure? Old boots? But the more I learn, the more I'm able to say that this is what I'm looking for." 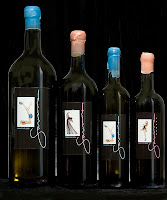 So, what about the wines themselves? Needless to say, I was rather curious, so without further adieu:

Savanna Wines 2005 Sogno Due -- As I noted above, this wine is made of 100% Falanghina grown in Campania. Savanna said that although this was her second wine, it was the first "really made for her taste." I thought that the nose was very light and gently fruity. The Sweet Partner in Crime said that it smelled like "peach flavored mineral water." After it opens a bit, there's a little woody scent that emerges, which is interesting since there's no oak used in production. It's a very light-bodied wine, as are most made with this varietal, but this one's light even comparatively. It's very smooth and easy to drink -- almost too easy, to be honest. There's tartness there -- but it's closer to a "pineappley" tartness rather than a citrus. The finish is very gentle and peachy, drifting softly away. After a little bit of time, the finish becomes slightly astringent rather than acidic. With a medium bodied soup, it fared reasonably well, although I'd say that it's probably best as an aperitif or for drinking on a rocky beach in summertime. I've seen this listed on average at around $17. The new vintage of Sogno Due is scheduled for release in June 2010, so I'll revisit it if it's available.

Savanna Wines 2005 Sogno Tre -- A 100% Barbera that "improves with some aeration," according to the tasting notes. I would concur. After an hour open, it's still very tart and tight, and it definitely improves after being decanted or run through an aerator. There's an interesting floral note to the nose, as well as some cherry. It's got a bit of an alcoholic fume, so it requires a good swirl. The flavor, like many Barbera, is dominated by tart cherry with some fairly strong acidity. The finish is relatively long and tart, finishing with gradually increasing tannin and some more acidity. There's a quality local pizza place nearby, and one of my favorite pairings with Barbera is a good pepperoni pizza. The acidity in Barbera generally gets smoothed out by the fat in the meat. With the wine's tannic structure, I thought it would be a good match. It wasn't bad. The flavor turned slightly grapey initially, but after a slice, it was pleasant enough pairing. It didn't blow me away, but it was relatively solid. The price point on this wine is $45-50, which honestly gave me a bit of sticker shock.

I asked Savanna about the "freshness" of both wines, since most Falanghina are made to be drunk relatively young and many Barbera can near the end of their peak after five years. She assured me that both wines are still in their prime. These particular samples may have gone through something to accelerate their aging, however, as they seemed like they might be a bit past peak. I'd be curious to hear what others think about them.

Snooth has one of the largest inventories of Savanna Samson wine available. They offer great discounts if you purchase more than 10 bottles of Samson wine in their online store.

I’ve been searching for some decent stuff on the subject and haven't had any luck up until this point, You just got a new biggest fan!.. แอบถ่ายคนไทย