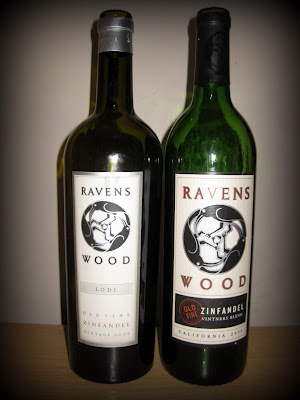 “I never thought this would happen to me. I am an administrator at a small Midwestern college and I was on my way to a conference in Asheville, North Carolina…”

No, you’re not reading the start of my letter to Penthouse Forum. There are no scantily-clad medical students with heaving bosoms whose car overheated, stranded on the side of I-75. There were no offers for me to “accompany them on their Grand Rounds” once I got them into the college van and escorted them to safety.

The trip to and from was uneventful. When I returned home, however, there was a mysterious package waiting for me. I was expecting one set of wine samples (the ones from Pepperwood Grove, which I’ve posted about already) – but a second set of samples showed up unannounced. I long ago learned not to look a gift horse in the (bottle) mouth.

So, why is this of note? The Biltmore Estate and its associated winery are in…Asheville, NC. We just missed each other. I could have saved them some shipping charges, although I don’t think the Vanderbilts are hurting for cash these days.

Anyway, the Biltmore winery itself grows about 250 tons of grapes a year. On site, they grow Chardonnay, Riesling, Viognier, Cabernet Franc, Cabernet Sauvignon, and Merlot. They sell about 140,000 cases of wine per year. One ton of grapes yields about 60 cases of wine. Since the estate’s grapes can only provide a little over 10% of that yield, grapes get sourced from other growing regions – largely in northern California.

In the mysterious Biltmore box was one each of the red and white from the Biltmore’s “Century Collection.” These wines, which retail for $13-16, were first bottled in 1999 as tasting-room only offerings. The Biltmore’s winemaker, Bernard DeLille, said that he was trying to create a wine that would allow a wine drinker to “re-live their Biltmore experience at home by simply opening a bottle and pouring a glass. As the wines grew in popularily, they expanded production and began making them available through retail outlets.

Biltmore (NV) Century Century Red Wine – This red, sourced from three locations in California, is a blend of Sangiovese, Merlot, and Zindfandel. The Sweet Partner in Crime swirled this and exclaimed, “Vanilla!” For sure. The first whiff is powerful vanilla, followed by a bunch of dark fruit. Blackberries and cherries, predominantly. This is a wine that really improves with decanting as, straight from the bottle, the finish is clipped and the flavors don’t last long. With some air, the flavors brighten a bit. It’s a “firm” wine, but the finish stayed quick, even after decanting. The fruit flavors are quite nice while they’re there and the tannins are mellow. We had this alongside a grilled flank steak, some sautéed mushrooms, and a salad. The vinaigrette wasn’t the best match with the wine, but the crystallized ginger we’d thrown in the salad was wonderful with it. The steak and mushrooms were tasty enough matches. A decent enough bottle for an everyday quaffer.

Biltmore (NV) Century White Wine – Ninety-eight percent of the juice in this wine comes from Mendocino and Monterey. Two percent is actually from North Carolina. It’s a blend of some very aromatic grapes – Gewurztraminer, Muscat Canelli, Riesling, and Symphony (which is a cross between Muscat and White Grenache). The nose is peppery and peachy. I thought it smelled very much like a Gewürztraminer from the Pacific Northwest. The major flavors are ripe pineapple with some cloves and cinnamon underneath. It turned out lighter than I expected. I thought it would be a bit more palate-coating considering the residual sugar level. The finish is peppery with a good deal of sweetness, as the residual sugar finally shows up. Again, a very solid wine – flavors like a Gewurz, but milder and not quite as heavy. If you were trying to introduce the notion that “not all sweet wine is bad” to a friend, this wouldn’t be a bad start. Conversely, if you wanted to start moving an “I only like sweet wine” person towards the light, this would laos be a good starting point. Foodwise, we had this alongside a Thai-style chicken, shrimp and rice soup since gewürztraminer goes so well with those flavors. This one was no exception.

This was my first time with Biltmore wines. I can only hope I have the same good fortune after my upcoming trip to Oregon…aforementioned medical students optional.
Posted by The Naked Vine at Monday, July 09, 2012 2 comments: