Jessie was adopted a few weeks too young, so she never truly understood that there actually was a difference between human and canine. She saw herself as human and acted accordingly. Everyone entering the household deserved a proper greeting (she was always a proper lady) -- even if that meant bowling them over before drowning them in joyful slobber. People food was obviously prepared for her -- as was discovered upon walking into the kitchen to find Jessie hungrily devouring the second of two enormous porterhouse steaks that she'd jumped onto a counter and then onto a shelf to reach. Jessie would scarf down pretty much anything in reach, and she marginally preferred beef to recently-worn underwear.

So, aside from sentimental reasons, what's a chocolate Labrador retriever doing in a wine column?

Again, Jessie never understood what was and wasn't meant for dogs. Pam returned home from a long day in the salt mines of her graduate education to her usual enthusiastic Jessie Greeting, only to find shards of wine bottle glass all over the kitchen floor -- and nothing else. She'd left a wine bottle too close to the edge of the counter and Jessie -- in her ever-curious way, had knocked it off -- only to have it shatter. Jessie was a resourceful critter, however, and wasn't one to waste good wine. So she drank it.

All of it. Every drop. Carefully.

A panicked call to the vet followed. The vet asked if she was bleeding -- she wasn't. He gave the advice: "Keep an eye on her and make sure there are no signs of internal bleeding. Otherwise, just watch her." Jessie was skillful. She didn't cut herself at all. But, after the equivalent of five glasses of cabernet, Jessie had a BAC of approximately .23. She was very happy that night -- walking around with her usual big grin, and then staggering into walls, cabinets, before finally lying down to enjoy her buzz. And, yes, she was a bit hung over when all was said and done.

One year ago this week, we made the difficult choice to bid adieu to our sweet girl. After 13 years, her quality of life wasn't what it should have been, and she let us know in no uncertain terms that she was just tired and ready to go. We miss her every day... 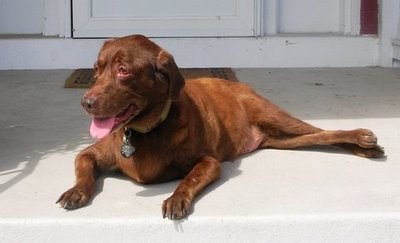 Dog House "Checker's Cab" 2002 Cabernet Sauvignon -- "Welcome to the Dog House." I find it very fitting to open the wines here, as Jessie never met a stranger, neither canine nor homo sapiens. Jessie's constantly wagging tail of destruction would be flying after a few tastes of this very straightforward, compact cabernet. The big blackberry jam nose on this wine gives way to a slightly oaky red with some nice background tastes of licorice. The finish is very gentle for a cabernet sauvignon -- not terribly tannic with some lingering smoky flavor. Very easy to drink -- the Dog House would be a good "transition cab" for people who enjoy mellower reds like merlot and are interested in giving drier wines a try. Foodwise, the classic pairing with a cabernet is grilled steak, and this would be no exception. Pot roasts, ribs, or earthy mushroom-based dishes would be great here, as well. If you want a great tailgating wine -- the screw top (which you should not fear…more on that later) makes it a winner before a ballgame around the grill…that is, if you're not pouring Maker's. Dog House goes for $8-11, and the winery also makes a contribution with each sale to a nonprofit called "Guide Dogs for the Blind." As we need more of a reason to open a bottle…

Vinum Cellars "Pets" 2003 Petit Sirah -- Jessie would have been the wrong critter to ask about petit sirah. She didn't have much of a discriminating palate. However, she would have gotten along famously with "Tanker" -- the vintner's lab, featured on the bottle. Many people think Petit Sirah and Syrah are the same grape. While both grapes make big, bold wines -- petit sirahs tend to be extremely dark in color, almost black, and yield big, bold flavors and strong tannins -- much stronger than the mellower syrah (or , which is the same grape). This wine needs to be opened and allowed to breathe for at least half an hour, but it's definitely worth the wait. The nose of this wine is powerful and fruity -- big scents of blueberry and blackberry. If you don't let it breathe, however, the fruit gets quickly overtaken by those signature tannins. However, with a little time exposed to air, the fruity complexity holds strongly against the tannin -- giving you a deliciously interesting flavor. The finish is long, spicy, and chocolaty. This big wine pairs up well with big foods -- roasted chicken or vegetables in sauce, prime rib, barbecue brisket. It also would go wonderfully with dark chocolate or big aged cheeses. Take the plunge with Pets to the tune of $12-15. And, in staying with the charitable theme, a portion of the sales go to the San Francisco Society for the Prevention of Cruelty to Animals.

Finnegan's "Fin." 2005 Chardonnay -- Jessie was full of surprises, and this chardonnay, with a profile of the puppy that is the wine's namesake, certainly gave me a start when I tasted it. I'm not a huge fan of chardonnays these days -- they're often too oaky for my tastes. However, this wine is light and subtle, much unlike Jessie -- although both would be great fun at a summer picnic. The "Fin." reminds me much more of a French Chablis than of most chardonnays you'll run into from , as it has a much lighter, much more lemony nose than most chardonnays you'll run into from there. The very fresh body has notes of vanilla and only a little bit of oak. The finish is long and light with just a little bit of spice. If you're not into the heavy oak or very buttery style of most chardonnays, you'll become a fan of Fin. Light pastas, almost any type of grilled or baked fish & shellfish would probably go extremely well. Chablis and oysters is a classic pairing, and this would probably fall right in line. Thai cuisine would also be a nice pairing, especially if fish sauce is in the preparation. You'll probably end up between $11-14 for this wine, so if Chablis-style chardonnay is your thing, you'll probably like it a great deal. Fin is a decent American substitute for a classic French wine -- and since the French were some of the first Europeans to trade with the indigenous population of the Labrador region of Canada, perhaps it follows that Jessie's wine would be more French in style.

Until next time…oh, wait…excuse me…Jessie's younger sibling Mooch is nosing my elbow. He wants to get in on the act. He may be a topic of a later issue, but sure -- why not. Here's Mooch's pick for this week:

McNab Ridge "Fred's Red" 2006 -- This syrah/zinfandel blend from would be good to have around the house as we start donning (or growing) our winter coats. Fred is the McNab Shepherd namesake of this winery's whose picture adorns the bottle. Much like Mooch -- this wine is quite straightforward. This is a just-released wine, so I'd be interested to see what a few months or a year would do here -- but it stands up now nicely enough. There's a very full nose here for such a young wine. You get a blueberry and cherry scent at first -- and you can also tell you've got a wine that's got a bit of alcohol in it. There's fruit and very solid tannins in the body, with a long finish of smoke and licorice. Right now, the muscle of the syrah is the dominant flavor. I'd be interested to see if the fruit of the zinfandel balances the tannin as the next year or two passes. Big meats, of course, will go well with this -- but I'd be interested to see how it would stand up to a baba ghanouj or other strong eggplanty dish. Fred's Red nestles into your wine rack for right around $10.

Until next time…throw your paws in the air, and wave them like you just don't care… 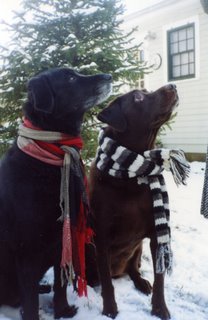 Jessie sounds like a great friend.
I grew up with an outdoor farm dog - a black lab mix who used to carefully lick out egg goo from the shells in the compost pile. She also used to visit the field and help herself to an ear of sweet corn, shuck it not-so-skillfully, then eat the sweet kernels with her front teeth, just like the humans. She even chose apples fallen from the tree to nosh on.

Mike, that was a very touching post, and the cabernet story made me laugh. Dog love can be a difficult thing to explain to people, but you captured it so perfectly.

A toast to Jessie!

Hey Mike: I just found this wonderful post, a belated comment to say I really enjoyed reading it...and there is absolutely nothing wierd about a chocolate lab in a wine blog!
www.muttnutt.com
Blog: www.muttnutt.wordpress.com