Wine & Dinner of the Month Club, Round 2!

Much to the pleasure of Christine the Pie Queen, her hubby Jeff is back by popular demand for another round of the Wine & Dinner of the Month Club. So, with a big note of thanks to Jeff and without further ado:

As you may recall, I had planned to stop submitting entries to the Vine after Christine’s January 2011 dinner, even though the wine/dinner of the month club continues and is now a permanent part of Christine’s birthday gift each year. However, for various reasons I have decided to continue as a contributor. First, I could not bear the thought of leaving my loyal readers (i.e. Christine’s family) in the lurch and second, Mike agreed to increase my royalties by 10%. Now, technically 10% of zero is still zero, but how many people can say they got a raise last year?

I will be doing things a little differently this year as I won’t be providing links to recipes because as much as possible I am going to get my recipes from The America’s Test Kitchen Family Cookbook Third Edition (© 2010 by The Editors at America’s Test Kitchen) which Christine gave me for Christmas this past year. With that introduction, here is the entry for February 2011.

(I didn’t make the last two menu items--more on that later.)

The dates were simple enough. Toast the walnuts in a dry pan on the stove. Take pitted dates from the package and stuff them with a walnut half and a small piece of parmesan cheese. You get the smokiness from the toasted walnuts blending with the sharpness of the cheese and sweetness of the dates for a simple and tasty treat. 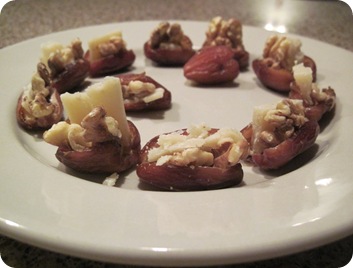 The ragu was simple to make but does take some time because it has to simmer for an hour or two. You basically make a tomato sauce with some onions and red wine and then place beef short ribs, which have been browned, into the pan and let it simmer until the meat on the ribs is tender. Since the ribs are mostly bone, there really isn’t that much meat in the sauce, but since it all simmers together the flavor of the beef permeates the sauce all the way through. When the sauce is done, the bones are removed from the sauce, leaving the tender meat. The sauce was served over ziti pasta with parmesan cheese grated over top. It had great, rich flavor that went well with the wine. The problem is that it was so good I almost finished eating before I drank any wine. Christine said next time I need to try more savoring and less shoveling. Good advice for life in general, I would say. 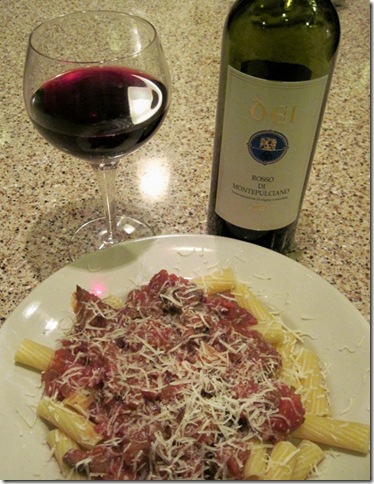 The salad and cake were brought over the night before by our friends Dave (our go to guy for salad and goat cheese) and Barb (dessert queen). You read that right. Christine may be the pie queen, but for other desserts, particularly chocolate, we defer to Barb. We had them both over for dinner the night before and the salad and cake were left over from that evening. The salad was a nice mix of greens, Craisens, carrots and blue cheese. The cake was three layers of decadence including, from bottom to top, a flourless chocolate cake, dark chocolate mousse, and white chocolate mousse. (The recipe is from Cook’s Illustrated.) It was a great way to top off a great meal! 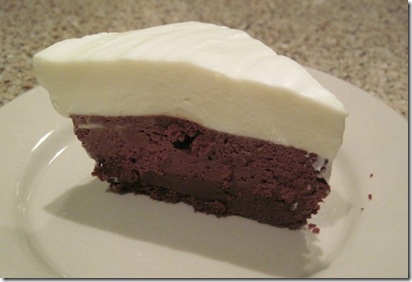 Mmm...nice job Jeff! I hope Christine is bringing some leftovers with her to DC!

Your loyal followers are happy to see another year continue! I agree with the philosophical point on savoring... good for food and life. Thanks Jeff!

That's my kind of meal - one that induces shoveling even more than drinking - kind of like Cepelinai.